As we come to the end of 2016 and approach Christmas, an exciting time of the working year, as staff are treated to workplace Christmas parties and often time off work over the Christmas and New Year period, some businesses find themselves in tricky situations: everything from misbehaving employees to disputes over annual leave rights and entitlements. However, there are also feel good stories that every now and then restore your faith and make even the most Grinch-worthy of people look forward to Christmas. I take a look at the workplace stories that have made headlines at Christmases past: the good, the bad and the ugly.

In December 2015, Hillcorp, a Houston based, privately held oil and natural gas exploration company gave each of their 1,381 employees an early Christmas present: a US$100,000 bonus (approx. AU$135,000) as a thank you for an excellent year. And this wasn’t the first time the company was outrageously generous towards its employees. In 2011, after doubling the company in size, staff were able to choose between two Christmas gifts: a $50,000 car or a $35,000 cash bonus.

In 2012, Random House, the publisher responsible for Fifty Shades of Grey, interrupted its corporate Christmas party to announce that all employees (from top editors to warehouse workers) would be receiving $5,000 bonuses after a profitable year (no doubt, in part, due to Fifty Shades).

Swinton Insurance offers a day off for all employees to get their Christmas shopping done, whilst Blurb, an online platform for self publishing books, gifts employees a day off and the funds to pay for a day trip, whether a day on the slopes skiing, at the spa or the movies.

A 9 year old boy used his letter to Santa not to ask for Christmas presents, but to request that his grandfather’s boss give his grandpa the day off. The manager reported to the boy’s grandfather: “I’ve received a phone call from the North Pole this morning asking me to contact Santa on his private cell… I called him, and he was quite concerned that you were planning to work on Christmas Day. Your grandchildren are quite upset about this! I think it would be best if you planned to take the day off and spend it with your family. Work can wait until after Christmas!”

In Peru, communities that live in the Andes use the 25th of December to participate in a tradition known as “Takanakuy”, which lets residents fight with anyone they like – even their boss. The idea of Takanakuy is that people build up their grievances over the year and save them up for Christmas, where everyone gets into a fight. Each fight begins and ends with a hug.

A recent study has shown that 43% of Canadians would like to hear Christmas music in the workplace. Conversely, in the UK, the government was asked to investigate policies on playing Christmas music in shops after trade unions labelled the practice of over-playing festive music a form of psychological “torture” that staff are forced to endure.

No article about workplace Christmases would be complete without drunken antics, debauchery and bosses behaving badly. 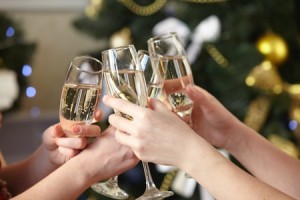 A UK survey has found that HR professionals are the most badly behaved departments when it comes to the work Christmas party. 72% of HR professionals said they had embarrassed themselves at

Employees were asked about the worst end of year gifts they had ever received from their employer. Here are some of the worst:

Meanwhile, a business in Quebec, Canada was forced to defend its decision not to give out its annual Christmas gift, a $50 gift card, all the way to Court. The arbitrator found that the annual gift that had been given to staff in the past had always been characterised as a discretionary bonus and could not constitute a vested right for employees.

In 2001, Merrill Lynch’s New Zealand Hawaiian themed Christmas party ended in tragedy when a 26-year-old investment banker reached under a toilet cubicle and set fire to a colleague’s synthetic grass skirt. The colleague suffered significant burns to 95% of his body and died three days later.

An employee who berated his colleague before finally pushing him fully clothed into a swimming pool during the company’s Christmas party was found to have been fairly dismissed. The Fair Work Commission found that employees who choose to drink at company functions “will also be held responsible for their own actions” and “society no longer readily accepts alcohol consumption as an excuse for bad behaviour and certainly not for physical violence.”

Conversely, an employee who spent the Christmas party intimidating and sexually harassing colleagues and telling managers to f—k off was unfairly dismissed after the employee was supplied with unlimited free alcohol. The Commission found that the conduct did not occur at the official Christmas party and occurred at a venue after the work sanctioned party had concluded. The Commission also questioned whether a company could require compliance of good behaviour at functions when they provide “unlimited service of free alcohol” to employees.

Three strikes and you’re out – is it possible to ban sports talk in the workplace?
2016 in Review