The announcement by the Fair Work Commission yesterday to increase the minimum wage was uncontroversial.   The new rate of $17.29, will represent a $16 increase per week for full time employees.

Firstly, casualisation of the workforce has been the latest economic trend for employers.  For casual workers a key issue is how much work they are actually offered, and not having access to some of the fundamental securities such as personal leave, paid public holidays and  annual leave which many of us take for granted.  The traditional polarity of employed vs unemployed is no longer the paradigm.  And therefore the traditional measures of minimum wage and percentage unemployment does not tell the whole story.  Under-employment is an issue which forces many families under the poverty line – not want for minimum wage per hour.

The second issue is a lack of proper enforcement.  The cash economies within hospitality, retail, agriculture and many other key domestic industries pay little attention to either the modern awards or the Fair Work Commission’s announcements.  It’s business as usual.  Fifty dollars per day and “as much coffee as you can drink” doesn’t add up to $656.90 very quickly, especially when a lack of superannuation guarantee and workers compenstion coverage is taken into account.   While a small minority of employees may regard cash payments as preferable, to avoid losing unemployment benefits, youth allowance or ausstudy, when the sortfall from minimum entitlements is actually calculated they are very rarely better off.  In my experience the majority of cash employees are simply not given the choice.

The Fair Work Ombudsman has their work cut out dealing with extreme cases such as this.     Investigating every single complaint is onerous, especially when many employees are unwilling to follow through with their complaint.   Even if the Ombudsman was able to audit every business in Australia every five years, this would miss a vast majority of small cash businesses, which have life cycles much shorter than this.

While I support an increase in minimum wage – I don’t see this as the most pressing issue relating to poverty in society or even the key step to be taken by the industrial relations system in Australia to protect vulnerable workers. 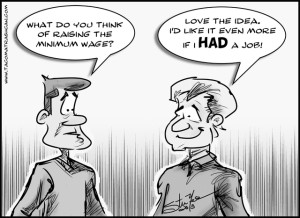 Elite performance and bullying at work – are some people flying over the radar…?
Litigation – what are the real costs?